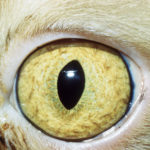 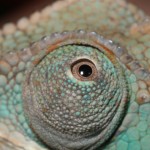 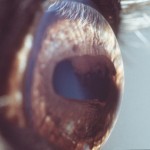 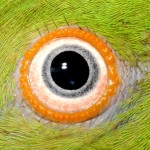 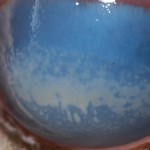 The ISVO Board is deeply saddened to convey news of the passing of Dr. Lloyd Helper who served as the Society’s Treasurer for 25 years from 1984-2009.  As such, Lloyd is responsible for the firm financial foundations upon which the ISVO now stands. In recognition of his service he became the founding honorary life member of the ISVO at the WSAVA meeting in NZ in 2013. For a lovely interview of Lloyd please see the Fall 2013 edition of The Globe in our “Newsletters” section of the ISVO website. 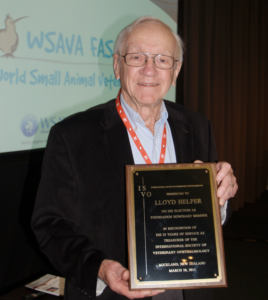 Dr. Lloyd Champ Helper, veterinarian, professor, Air Force officer and much beloved husband, father, grandfather and great grandfather passed away on July 18, 2021 in Fort Collins, Colorado. Born March 30, 1929, Lloyd grew up a farm boy near Henry and Princeton, Illinois before moving to Champaign, Illinois in 1947 to attend the University of Illinois. There he earned BS degrees in agriculture science and veterinary science in 1953 and a DVM in 1955. It was there he also met Evalyne Jean Jackson, his wife of 67 years. He was called to active duty in 1956, when he was commissioned as an officer in the Veterinary and Preventative Medicine sections of the 1852nd Air Force medical squadron, Biggs Air Force Base, El Paso, Texas. Upon his release in 1958, he enlisted in the Air Force Reserve, rising to the rank of Lieutenant Colonel in the Veterinary and the Environmental Health corps before retiring 32 years later. Lloyd joined the veterinary faculty at the University of Illinois upon graduation in 1955, earned a further MS degree there in clinical medicine in 1961, and was a post-doctoral fellow in comparative ophthalmic pathology at Stanford University School of Medicine in 1969-1970. As a professor, his roles included teaching, research and heading the U of I College of Veterinary Medicine’s ophthalmology section, roles he relinquished only upon becoming Associate Dean of Student Affairs at the college in 1982. He retired from U of I in 1993. He was an award-winning teacher, a valued mentor, and much admired for his professional and personal demeanor. In recognition of the latter, the College established in 2002 the Dr. & Mrs. Lloyd Helper Veterinary Student and Faculty Collegiality awards. He was eternally proud to have seen two of his children attain DVMs in 1983 and 1984 from the College and go on to careers as veterinarians.
Lloyd was a pioneer in veterinary ophthalmology. He was a well-known teacher, researcher and consultant, and was widely recognized for service to his profession. He is best known as author of the 4th edition of Magrane’s Canine Ophthalmology, a standard text in the field, but also published 43 research papers in refereed journals, wrote several book chapters and authored 25+ articles for other publications. He was a charter Diplomate of the American College of Veterinary Ophthalmologists in 1971, and president in 1976 of the Eastern Illinois Veterinary Medical Association. He served on an American Veterinary Medical Association Advisory Board from 1982 to 1995, and was a long-standing Treasurer for the International Society of Veterinary Ophthalmologists who, in 2013, recognized him as a Foundation Honorary Member for his 25 years of service.
As an avid traveler and outdoorsman, Lloyd enjoyed trout fishing, downhill skiing, hiking and other pursuits, always in the company of family and friends. He and Jean saw much of the world together while traveling to meetings and conferences. Together they made friends around the globe. Upon retirement they continued to travel international, taking each of their grandchildren with them on a succession of trips to various countries. They and others remember Lloyd as a prolific story and joke teller, a craft he continued to hone in creative writing classes after retirement. His short story recollections are a joy to read and a lasting testament to the various facets of his life. An eternal optimist, Lloyd chose to see and assume the best of everyone and everything. We should all be more like him.
Lloyd was predeceased by parents Walter Champ and Veva Leone Morris Helper, and siblings Malcolm Helper and Sylvia Gladhill. He is survived by his wife Jean, brother John and sister Mary Carloye, by his children Mark, David, Debra and Patricia and their spouses; by grandchildren Sarah Beckner, Lisa Helper, Jacob and Lucas Helper, Megan, Jennifer and Hannah Frank, Nicholas Wright, and Laura Kopp; and by great grandchildren Cooper and Carter Beckner, John Wright and Alden Kopp.
The family wishes to thank Dustin of Alpha Omega Home Health and caregivers Megan, Suhki and Tamika, as well as Pathway Hospice, for their excellent care in the last 2 1⁄2 years of his life. In lieu of flowers, please consider a donation in Lloyd’s name to the Dr. & Mrs. Lloyd Helper Veterinary Student and Faculty Collegiality Award fund.

The International Society of Veterinary Ophthalmology (ISVO) serves as a bridge between many different local and national veterinary ophthalmology organizations thereby promoting the worldwide exchange of information relating to the eye and vision in both the domestic and native animal species. We invite you to take a look around our website and make full use of its resources. 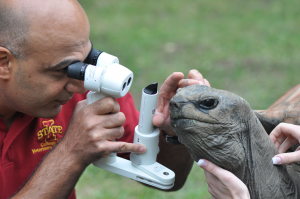 If you have an interest in veterinary or comparative ophthalmology, we encourage you to join the ISVO. The ISVO accepts individual memberships as well as membership applications from other Ophthalmic Organizations. For full details please see our membership benefits page. To become an individual member JOIN HERE. If you are interested in joining via your local ophthalmic organization, please write to the ISVO Secretary.
Veterinarians and veterinary medicine students, join our closed group on Facebook

The ISVO is proud to serve as a bridge between veterinary ophthalmology organizations worldwide! The following are members of the ISVO: